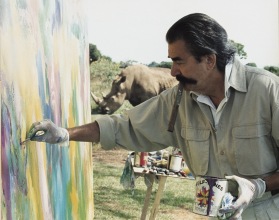 Strong colors & vivid images jump off the walls of celebrated artist LeRoy Neiman’s Manhattan art studio.  His current projects include a painting of the unforgettable Army-Navy football game of 1946 and portrait of Minnesota Gov. Jesse Ventura. Sculptures of horses of different sizes and colors are also displayed on his windowsill. Strangely enough, you don’t see any signs of the most important animal in this artist’s life.

Neiman, one of this country’s most famous contemporary artists, still seems to be healing from the loss of his best friend, Penny, a Yorkshire terrier who died in 1996.  Although Neiman was raised around animals in St. Paul, Minn., Penny was the only pet he had ever owned.  It was love at first sight.  “I was walking down the street and saw this beautiful animal in the window of a pet store,” Neiman recalls. “I never thought I wanted a dog or any other animal but when I saw Penny I knew I wanted to give her a home.”

Neiman, who worked alone in his studio, found Penny to be a faithful companion. She brought him love and inspiration for many years. He painted and drew sketches of her in different stages of her life and is eager to show one of the first drawings he made soon after bringing her home. Many paintings preceded the very last sketch he made of her the day she died. “When she got really old and sick I stopped drawing her. It was too painful to see her losing her teeth and struggling to move,” says Neiman displaying an early drawing of a happy puppy in juxtaposition with an old dog in declining health.

Artist and muse were inseparable for 16 years. “Penny still lives in this house,” he says nostalgically. “She had her own way as we all do. She was a very important part of this household.” Neiman comments that he sometimes thinks about getting another dog but hasn’t made a decision yet.  “It’s a lot of commitment.  If you want a pet, you need to address all his needs.  You need to make sure you will be there for him,” he explains. Although he loves the idea of dog-walkers, Neiman prefers to take care of his own animals. “Spending time with your pet is fun,” he adds. “Everyone has a lot to learn from them.”

It sounds almost as if the artist is talking about a human being. According to Neiman, animals and people have much more in common than we dare to think.  “Pets are just like people: if they catch your attention there is something very special about them, either their unique personality or outstanding looks,” he explains. “You cannot draw or paint a person or animal without relating or comparing him to others. You must search for their identity, what makes them special.”

Throughout his career Neiman has painted various animals ranging from cats to tigers.  Besides horses, his favorite subjects to paint are wild creatures. “I find the lion and the elephant the most compelling animals,” the artist reveals. He had a chance to see them up close when he went to Africa in the mid-90’s to shoot a documentary and paint exotic wildlife.

“When you are out there, you see characteristics of everyone in the wild,” Neiman explains while reminiscing about his African adventure. He then explains the difference between domestic and wild animals. “You see the mood of survival.  If you compare the look you see on wild animals to the look you see on their domestic counterparts, it is completely different. A dog that is catered to never has to look out for potential predators.  He knows he will never be overtaken.”

Neiman realizes he can’t have a wild lion to keep him company in his studio, the concrete jungle, but is beginning to consider getting another dog. “Maybe a Maltese. I like small dogs,” he says. “I don’t think it’s fair to keep a big one locked in this studio.”

It seems that, after all, the animal painter is ready to give puppy love a second chance.