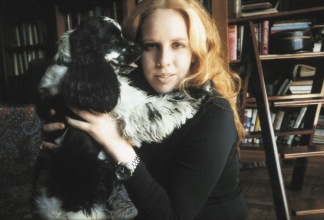 It was about the time my boyfriend Mike and I were falling apart. We were living together and close to marriage, but deep down we knew that the relationship wasn’t working. I was walking home on one of those hot summer nights when I passed a pet store. Without thinking I walked in and headed straight to the back.

I always wanted a puppy, but my parents had been adamantly opposed to pet stores. They told me the animals are from puppy mills and the dogs are abused and even killed!  But I was in one of those hopelessly lonely moods that night, strong enough to block the most traumatizing parental admonitions. I thought that a puppy could salvage my relationship with Mike. A new member of the family, I reasoned, could make us want a family of our own.

I looked around at all of the puppies. They were beautiful, but having been an ugly child I found these perfect things frightening and alienating. It was then I saw Godzuki. She looked horrible, worse than anything I had ever seen. She stood out because she was at least twice as large as the other frolicking, painfully adorable pups. “Why does that puppy look so awful?” I asked.

“She’s not really a puppy,” said the pet store owner, “she’s already been here for six months. Nobody wants her.”

I wanted her. The owner took her out of her cage and Godzuki sat on the floor with me, shaking and scared. She was a mess, nervous as a rabbit and her hair falling out in clumps. We looked perfect together, the girl who had been ugly most of her life and her completely neurotic dog.

The owner of the store didn’t charge me for her. “She’s too old to sell,” he said. He also told me, with hesitation, as if extra information might change my mind, “There’s something wrong with her feet.” I looked down, she walked as if on her wrists. Her increasingly uniqueness didn’t change my mind. I even dropped three hundred dollars on plastic dog toys for her.

Back at the household I was trying to repair, Mike appeared pleased with the new addition. Of course, he was miffed that I didn’t consult with him first and slightly taken aback by the fact that she was the ugliest puppy he had ever seen. “Typical,” he said, “you would have to choose this dog.” But Godzuki, like an awkward child, gradually became beautiful. The vet put her on special food so that her hair grew back sleek and healthy. She’s a Harlequin cocker spaniel, black and white, and she looks like she’s been playing in a can of paint. Before we knew it we had the most adorable dog in the neighborhood. Unfortunately, our relationship was not transforming as wonderfully as Godzuki’s looks. Mike began working later and later. I retreated into myself. 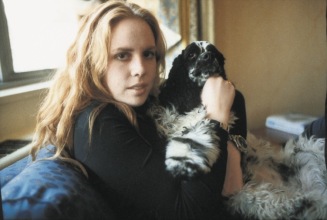 As it turned out, Godzuki brought us together for only a short time. Soon, we started becoming the people we were before she entered our lives. Godzuki felt our animosity the most. I would scream at Mike and she would hide under our armchair, like a child caught in the middle of her parents divorce. She loved both of us. But we were too engaged in fighting. We didn’t have the energy to pay attention to her. We had switched from being loving parents to acting like selfish children. It wasn’t long before Mike moved out.

Godzuki was aware of Mike’s absence.  She started to sleep on his side of the bed as if he had left the space especially for her. For a short time I blamed her for not making us into the people we hoped she would. Which was ridiculous, since she’s only a dog.

Although we missed Mike, we began a new life together. Now she sits by my feet while I write. She chews on rawhide hotdogs while I drink Pepsi One or smoke cigarettes. We are quite a team. I write and she listens.  Occasionally I ask her how to spell something (being that I am notoriously bad at it) but she isn’t much help either. If she doesn’t like something I read to her, she rolls over in her green velvet dog bed and falls asleep.

We are writer and canine. She is my child, my editor, my critic and, more than anything she fills the space Mike left behind. I have dated a couple of guys since Mike, but none of them could adjust to Godzuki, the beautiful former monster who is so central to my life. Even though I miss Mike most of the time, I’m happy being the single mother of Godzuki.