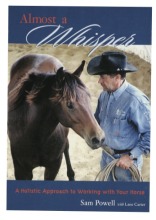 Almost a Whisper: A Holistic Approach to Working With Your Horse

Listening seems to be a forgotten art these days,” says Zen horseman Sam Powell. In an effort to raise awareness, Powell travels the country introducing novice and veteran horsemen alike to his technique, Teaching by Asking. “You can’t make a horse do anything,” Powell asserts, “but you can teach by asking and listening to the horse’s response.”

Powell’s notable success as a teacher is the culmination of 40 years of equine engrossment. Yet it wasn’t until this rough-and-tumble rider witnessed too many cowboy and horse injuries that he began to rethink his heavy-handed approach. Employing his late father’s gentle method of horse training, Powell sought out the horse as his teacher, not his student. Thus, he traded his practice of dominating and breaking for understanding and gentling. According to this convert, all problems humans have with horses are caused by humans. His remedy for a successful partnership: Accept and appreciate the horse and its culture; in turn the horse will respect and trust you. Reward success. Don’t punish failure. Readers who scoff at Powell’s back-to-the-basics ideology may be those most in need of reminding. 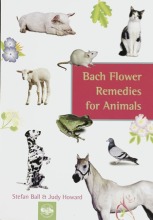 Is your dog unnaturally clingy and possessive? Chicory or Holly could solve the problem. Does he suffer from attention disorder during obedience class? Clematis could tighten his focus. Straining on his leash? Vervain could curb the impulse. If none of the above makes sense, it will after boning up on Bach flower remedies. First introduced in the 1930s by Dr. Edward Bach of England, the plant and flower-based tinctures have a long track record of success with humans. His holistic approach now includes the animal kingdom.

In recognizing that mental attitude plays a significant role in physical well being, Bach concluded that disease could be put off by controlling one’s temperamental flaws, such as fear, uncertainty, and loneliness, through natural, plant-based antidotes. All 38 remedies and elaboration on their relevant applications are listed along with dosage directions, diagnosis tips, and legal considerations for practitioners. Case studies and frequently asked questions provide real evidence of success. For example, Mimulus is attributed with soothing a spooked cat during a thunderstorm; Larch is purported to have restored a mistreated dog’s confidence. And the mother of all tinctures, Rescue Remedy, is said to have saved the life of a horse suffering from a severe allergic reaction.

Skeptics accustomed to conventional medicine will undoubtedly be inclined toward Bach bashing. The fact is, these natural remedies are clearly meant to complement, not replace, traditional veterinary medicine. Once familiar with the basic principles, you’ll learn how to curb impatience with impatiens and calm anxiety with elm. A resource list of cassettes, videos, and courses produced by the Bach Centre and the Bach Foundation aids the learning process. 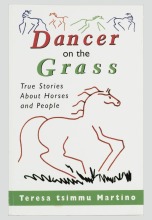 Dancer on the Grass: True Stories About Horses and People

In her book of essays, Martino explores her journey from a young, courageous, and thrill-seeking cross-country event rider to a sensitive, philosophical horse protector. Initiated early into the world of horses by her beloved father, Martino discovered “that on horseback the world changes. Suddenly you can gallop, you can fly.”

The prodigious Martino moved up quickly in the ranks, earning her teaching certificate at the Vale Equestrian Center in England and ultimately becoming head coach at a two-million-dollar horse facility on the West Coast. The turning point in these essays comes when one of the cross-country hopefuls at the facility has difficulty jumping in upper-level events. Martino, respectfully unwilling to force the horse, experiences an awakening that eventually sends her to an island to live with her wolf rescues, her art, and her pet horses. In horses she had discovered an allegiance that “made human loyalty seem pinched and miserly.”

Her passionate prose reads with the revelation and honesty of a schoolgirl’s picked-lock diary, yet at times her literary credibility suffers at the hands of an unexacting editor and a notably truant proofreader. For the most part, however, her compassion and humanity spring forth from the page despite these syntactical obstacles.

“Life brings me creatures,” she says, “who are down on their luck.” If I come back as a horse in need, I want to call Teresa Martino’s pasture near the waters of Puget Sound my home. It must certainly be a place filled with soft, benedictory whickers and idyllic happiness. 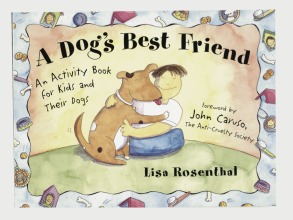 A Dog’s Best Friend: An Activity Book for Kids and Their Dogs

It’s seven o’clock on a looney tune–laden Saturday morning; do you know where your child is? If A Dog’s Best Friend is on your family’s bookshelf, don’t look in front of the tube, folks. Check the doghouse. Chances are your dog and child are in cahoots, perhaps sewing a pooch pillow, playing hide and go seek, or going over the recipe for peanut butter yummies. Or maybe they’re drawing up a vaccination chart, playing beauty shop, or preparing a road trip. In this constructive activity book for kids, sensible canine counsel and essential safety tips are inconspicuously tucked between pages of fun, creative projects that may very well nudge an unsuspecting child toward responsibility. Activities that incorporate grooming, feeding, health care, and training involve your child in the day-to-day care for the dog he surely “had to have” while teaching him patience, compassion, and true friendship. The ensuing partnership is a win-win situation.

Who says you can’t teach a young child old tricks?

By Linda B. Mullally (Falcon)

Dog-loving outdoor enthusiasts rejoice! Here’s the definitive guide on hiking with your hound that will have the two of you blazing trails, hopping streams, and setting up camp in dog-friendly parks and forests across the country. Author and lifelong terrain trekker Linda Mullally shares her expertise on raising well-behaved hiking dogs with advice on conditioning and obedience training, trail etiquette, safety, first aid, and more.

Despite its brevity (94 pages), this guide covers a lot of ground. Find out why a bandanna tied around your dog’s neck is more than just a chic fashion accessory; why temporary ID tags could save your dog’s life; how to fit your dog for his very own pooch pack.  Learn why foxtail is not your friend, the merits of harness versus collar, and what to do if wildlife unexpectedly crosses your path. What-to-pack checklists, sources for gear, and suggestions on further reading round out the package. You even get a recipe for Phil’s Liver and Onion Chews for the trail. So on your next amble through the bramble, invite your dog along to do a little canine communing with nature. He’ll love you (even more) for it. Ready, set, hike! 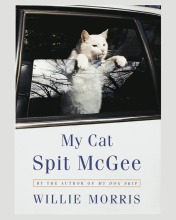 Not since the Hatfields and the McCoys have two groups been pitted so vehemently against each other. Enter into Willie Morris’s world, where the meritorious love of dogs and the unthinkable love of cats are not only at battle, but are mutually exclusive realities, period. A self-proclaimed “dog man,” the late Morris effortlessly cultivated his life-long hatred of cats while growing up in Mississippi. Only when faced with an equally self-proclaimed “Cat Woman,” aka, his fiancé, did Morris’s journey into the feline forum unfold.

Morris’s first tiny tigress? Rivers Applewhite, a waif of a kitten found on Highway 51 and presented, unbeknownst to the author, to his fiancé on Christmas day. Faced with the unavoidable presence of the, gasp, anti-dog, Morris sought out “some sound counsel about cats” from several feline fanciers only to come up short on enlightenment. Rivers, it would turn out, was merely the first cat to enter Morris’s home, while Rivers’s son Spit McGee was the first to enter his heart. “Live, kid, live!” the dog man pleaded upon Spit’s complicated birth as he rubbed the “formless blob’s” amniotic sac in a desperate attempt to get “it” to breathe. And breathe it did. Lives pivot on small, deeply personal moments, and with his improbable midwifery, a significant transformation in Morris did, in fact, occur. “With the survival of Spit McGee I would become against all past injunctions a cat-watcher, observing his curious de-velopment from a kitten on.”

And his observations are keen, endearing, and humorous at that. When Morris, after futilely attempting to teach Spit to fetch, heads to the local library to research his former four-legged foe, the reader quickly surmises the veracity of his bewilderment: he just doesn’t get it.  Despite his insightful proclamation, “cats ain’t dogs,” it’s not until later that he begins to understand and appreciate the differences in the species. His articulations on Spit take shape in fascination (he not so much walked as glided), indulgence (he even liked fresh boiled asparagus if this was garnished with Parmesan cheese), camaraderie (often in fine weather we sit together down by the creek and I tell him things), and appreciation (never once can I take Spit for granted).

Some have labeled Spit a follow-up to My Dog Skip, Morris’s heralded account of his childhood and his beloved dog. Although Skip is mentioned throughout, along with Morris’s middle-years ally, a black lab named Pete, these pages were undeniably penned for none other than Spit and his periphery kitty entourage. Remembrances of Skip and Pete abound, to be sure, yet they mainly serve to set the feline-fearing stage on which Morris, pre-Spit, lived his life.

One false note: His apparent disregard for spaying his female cats in the face of such devastating pet overpopulation in our country is disappointing. One hopes he would have known better. 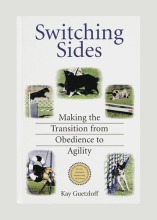 Switching Sides: Making the Transition from Obedience to Agility

Red Rover, Red Rover, send obedience trial competitors right over! Promises of a more rewarding job and a better time had by all could bring dozens of doggie defectors over the border from traditional obedience and into the exciting land of agility. In Switching Sides, Kay Guetzloff outlines the natural progression from competitive obedience trials to the fast-growing sport of agility, all the while tastefully touting the latter because of its appeal to a wider range of both dogs and handlers. While dogs in the obedience ring may seem bored, it is rare, according to the author, to see a dog racing through the agility course not enjoying himself. What’s more, a dog can actually receive the unbridled encouragement he so loves from his handler during agility, something that is unheard of in the re-served, one-word-command world of obedience competition. The fact that many different breeds excel in agility could be further reason for the sport’s soaring popularity. Even our senior canine card-carrying “AARF” members can compete in agility provided they’re in good health.

Laced heavily with agility jargon and intricate course diagrams, this how-to is definitely geared to-ward those serious about the sport. Yet novice competitors need not be intimidated. On the contrary, enthusiastic beginners are sure to relish the thorough, easy-to-follow instructions from one of the owners and trainers of the late top-ranked obedience dog in the country. Since mastery of each individual obstacle is encouraged, separate training instructions are included on the jumps, the A-frame, the seesaw, the weave poles, and  more, before bringing it all together into a successful  course run. Directions for constructing your own agility jumps and a list of organizations offering agility competitions are included.

Those hailing from the obedience ring have most likely already bonded as partners with their dogs, thus preparing them for the teamwork so vital in agility. Yet much differs from the rigidity of obedience in the freethinking arena of agility, and what better way to make the transition than armed with this comprehensive manual?