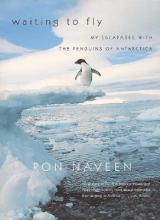 It’s been said we are judged by the company we keep. What then, could be ascertained of one who willingly falls in with shameless thieves and wing-flapping philanderers who are seemingly incapable of conscience-rousing regret? In Ron Naveen’s case, it says he’s a globally aware field scientist who sees his main research subjects – the witty penguins of Antarctica – positioned at the forefront of global climate change. Aside from the far-reaching weather implications these barometric birds play a part in it, it’s perhaps safe to say he’s merely fallen in love. “They’ve grabbed me and simply won’t let go,” Naveen says. “I admire them greatly – just for being penguins.”

Specifically, Naveen is referring to brush-tailed penguins – the chinstraps, gentoos and Adèlies natives to the Antarctic Peninsula. For the past sixteen austral springs and summer field seasons, Naveen has spent the equivalent of three to four entire years working in the Peninsula with his eyes peeled, digging up data on these flightless, aquatic creatures. “I count penguins,” he says of his work with the Antarctic Site Inventory, a census project. Thankfully, he expounds on that modesty understated synopsis by piecing together an account that is not only educational and entertaining, but also very well written. This scientist puts pen to paper and produces prose that is at time indisputably poetic.

Naveen’s respect for penguin tenacity and Mother Nature alike grows page by page. “Antarctica makes you think,” he reflects, revealing the weight of his ponderings. Then on a lighter note and with apparent appreciation, “Penguins simply don’t think, worry or reason.” Naveen relates hilarious exploits of rampant pebble theft during the crucial nest-building period as well as awe-inspiring details of hearing a young gentoo’s heartbeat as the chick actually sat on his lap.

Perhaps too generous a nod to his penguin-studying predecessors leaves the reader wanting more of Naveen’s own perceptive observations and subsequent heartfelt and profound ramblings. On the whole, however, one can only hope this man’s wingding with the guani-spewing ‘guins continues for at least sixteen more well-documented seasons.