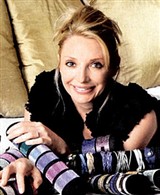 Vanessa Swarovski is excited. She’s captured the exclusive rights in Florida to a Paris based jewelry design company, Gioia – a wonderful addition to her eclectic mix of fine jewels sold in her recently opened Vero Beach, Florida store, Vanessa S.

In addition to fine jewelry, Vanessa S. also sells crystal jewelry, accessories such as bags and belts, pashminas and yes, some pieces feature Swarovski crystals. But Swarovski points out that they represent only a small part of the collection she has assembled in her store. Though clearly proud of her last name, Vanessa features her first name on the doors of the boutique.

Vanessa S., which opened in October, caters to many clients, according to its owner. “The store has a young style,” says Swarovski, “but the price tag is for someone who is more established.” She does concede, however that in today’s world the two are not necessarily contradictory and she fully expects clients of all ages to shop with her.

Swarovski, who is a certified gemologist with a degree from the Gemological Institute of America, began her career in the family company’s gemstone division. “My job was selling loose stones to manufacturers,” she says, “but at some point you want to deal with the finished products.”

Vanessa then discovered the world of online jewelry sales. “I started out selling jewelry on the Internet,” she says, “but then I just thought it would be fun to have a flagship boutique somewhere.” And so, Vanessa S. was born.

The choice to open her boutique in Florida was a natural one. Though she grew up in Austria, Swarovski spent a good deal of time in the United States where she attended college. While she has lived all over the country, she calls Florida her American home. “My grandparents now live in Florida permanently, and we’ve always been coming here,” Swarovski explains. “My great-grandfather built a house here in the beach in the 50s and my parents have a house here.”

A lot of hard work went into opening Vanessa S., according to Swarovski, but it has been a labor of love, and one that her 2 year-old Italian Volpino, Lillie, has shared with her. “While I’m working, she sleeps under my desk,” Swarovski says of Lillie. “She is definitely my best friend and a complete support system. She’s added a lot to my life.”

Living with a dog has proven much easier than Swarovski thought. “I always wanted a dog and everyone told me the downside,” she says. “They said you can’t travel etc., but she’s the perfect pet. I can put her in a bag and travel with her – no problem. I took her to hotels and cafes in Europe. It’s a bit stricter here though.”

Swarovski found Lillie in Munich and had her for a month before she chose the perfect name for a new puppy. “It took about a month before I learned her character and then Lillie was it,” she says. What is Lillie like? “She’s such a little lady’s dog,” Swarovski says. “She has this red for and black lips and it looks like she has makeup on! She’s so beautiful.”

Lillie has free reign in Swarovski’s home and is, of course, allowed to roam the new store as well. She does have to share the spotlight at home with Swarovski’s Indian Ringneck, Cielo. The beautiful bird’s light blue color inspired his name (cielo means sky) and was the perfect match for the color scheme at Vanessa S. where Swarovski had hoped to keep him. Cielo never did end up in the store, but became a home pal of Swarovski’s and of Lillie’s too.

Cielo didn’t end up with his original name either, according to Swarovski who called in this last minute addendum to our discussion. “By the way,” she says, “my bird is now renamed Moses, as Cielo was too innocent and quasi ecclesiastical. Hopefully he will get as old (and wise) as Moses.”

As for canine couture jewelry, Vanessa Swarovski says she is on the hunt, but hasn’t found just the right pieces yet for her boutique. Until then, pet lovers should note that arrays of animal themed pieces are offered at Vanessa S. including fish, sea-horses and otters.

For the young women who grew up all over the world and who has traveled much of her life, the new store and Lillie are really about the same thing: settling down and planting roots. The two share something else as well – they are both the subjects of Swarovski’s passion.