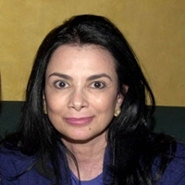 With so much written about her, Mary Boone feels embarrassed by yet another article. Her work, and not the publicity it has garnered for her, has always been her primary interest. “I have a gallery because I love art,” she says. Dubbed by the media as ‘the diminutive entrepreneur,’ Boone’s drive, hard work and ambition have earned her one of the most recognized and revered names in the art world. She agreed to speak with Animal Fair because she loves to talk about art, and of course her son’s dog, Moritz.

For a woman who is time and time again noted for her precise nature, her obsessively methodical working style and a gallery, apartment, and personal appearance described as ‘clean of fluff’, canine companionship seemed unexpected. I wondered how she came to bring Moritz into her life. “Very good question,” Boone says, amused by the inquiry. “Besides being a perfectionist, I collect art and furniture, having animas does seem antithetical to that environment?” Boone got the dog two years ago as a gift for a thirteen year-old son, Max. “He is an only child and always wanted a dog, and had worked very hard at school to earn good grades,” she explains. “Despite a certain amount of reluctance, I bought the dog because he deserved it. We chose a dachshund because that’s the dog I grew up with.” Boone named it him Moritz after a German comic strip called ‘Max and Moritz’ similar to this country’s ‘Mutt and Jeff’. (Max’s son is German). “Do you think your dog says something about your personality?” I inquire. “Absolutely, dachshunds are little dogs that think big,” Boone quips.

In the early 80’s Boone benefited from the exuberant prosperity in the marketplace. In an interview at the time Boone observed that, “suddenly artists were interesting ti the lass media. There were stories in the artists, but not on their painting anymore. It was about them, their lifestyles,” she says. “That attracted a lot of new money, peope who wanted to be culturally solvent and they bought art.”

Boone doesn’t feel that the economic boom of the last few years is fueling the art market in the same way it did 20 years ago, however. “I think that having art has become part of one’s life, a given,” she says. “Whereas previously there used to be a clear division between people who were collectors and people who had bare walls and bought prints and posters, now there is a large number of people whom I couldn’t necessarily call collectors who but voraciously, but are nevertheless, interested in art. I think that buying unique works of art has become part of our cultural vocabulary.”

Despite this, the new wave of dot-com millionaires hasn’t affected her client base much, she says. “I find artists more cautious about overproducing. They are being very careful about severely editing themselves,” she says. “So the kind of computer money and computer age we’re experiencing doesn’t really affect my business because it’s not like Gucci or LVMH where you can go in and actually produce forty million more suits. You can’t up the product in art.”

So who are her clients? Boone has many, but she says she prefers to work with “someone who buys with the idea that it’s about education and spirituality. I deal primarily with living artists and am interested in people that understand that although they bought something and own it, they are still sensitive to the artists’ feelings.” Novices don’t bother her either. “People come into the gallery with various degrees of knowledge, and I don’t mind that,” she says. “As long as they have honorable intentions and a good heart, I’m happy to talk to them.”

What Boone offers her clients is guidance rather than influence. “They want to see things, be exposed,” she says. “I think great collectors are similar to artists. They are usually creative people themselves who need a creative outlet that possibly they are not finding at their jobs, so they turn to collecting. Most artists produced art either out of love and/or for their hobby.”

How these new collectors are making purchases is relatively unchanged despite technology’s advancements, Boone says. “A lot of people have tried to use computers as a network to selling art and I think they haven’t been very successful because you can’t substitute for the experience of standing in front of a painting.”

According to Boone, there is also no substitute for New York when talking about the center of the art world. Claiming that it takes about a century to shift art centers, she sees the next possible hub of art activity in Asia. For now, though, her gallery is firmly planted in Manhattan. After nearly twenty years on West Broadway in Soho, Boone recently moved her gallery up to 757 Fifth Avenue. “It’s not just about where your galleries are, but the whole structure of the art world: the collectors, the information, the museums, and the artists,” she says.

Boone is still a force in the art world, but like any hard working New Yorker, she looks forward to taking a break from it all. Her yearly Christmas holiday on the island of St. Barts is her great getaway and always includes her dog. “Of course we bring Moritz with us,” she says. Back in New York, Moritz isn’t allowed in Boone’s current space but she claims, “I will bring him to my new gallery. I’m opening in Chelsea!”