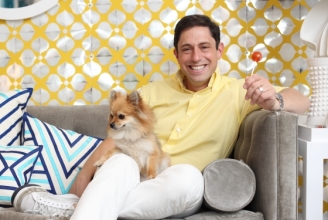 Can a dog be the inspiration for art? One of the country’s hottest young potters and textile makers, Jonathan Adler, thinks so. Adler has become the rising star of modern design and is AF’s poster boy for modern living with pets.

The sleek, clean lines and subtle shapes and colors of Jonathan Adler’s work have caught the attention ceramic collectors for several years now, bringing the young artist a good deal of new-found fame. But Adler remains remarkably humble and down-to-earth about his success as he eases into a conversation, not about his latest line, but about his beloved dog, Liberace. Named after the famed pianist Adler so admires, Adler’s 2 year-old Norwich terrier has added both friendship and focus to the lives of the artist and his husband, Simon Doonan, the celebrated creative director of Barney’s department store and author of the acclaimed Confessions of a Window Dresser.

Adler speaks unabashedly about his commitment to Liberace. He spends three days a week in the Hamptons (the location of his newest boutique) to benefit his precious pooch and says that Liberace is a trooper about making the transition to urban life when they return to the city. Adler hopes to open a boutique in London if restrictions on traveling with dogs are ever relaxed. In the meantime, he and Doonan travel where dogs are welcome. St Bart’s is a favorite for the couple because the French influence permits dogs to go just about anywhere.

Adler’s love for his pets is evident. His catalog features a photo of Liberace cozying up amongst Adler’s hand crafted pillows. The brochure includes a time line of Adler’s life and career as well and states that the most momentous event of 1999 was the adoption of Liberace, whom he calls, “the light of our lives.”

Adler claims that inspiration for his pottery comes from a variety of sources, including animals and organic beings, glass (including elongated Coke bottles from the past), graphic design, and high fashion. One of his first lines had a quilted quality evoking Chanel bags. He describes his overall design concept as “handcrafted, modernist, irreverent and luxe, and, “the same words can be applied to Liberace.”

Liberace has inspired Adler’s textile designs as well. Fondly referred to as his “apricot terrorist,” Liberace and his coloring are reflected in Adler’s pillows and rugs. It isn’t all about the dog, however. The actual designs in his textiles are inspired by Scandinavian textile designs. Some patterns for his pillows include geometric takes on zebra prints, snails, butterflies and flowers.

With pots and vases that combine touches of fifties kitsch, futuristic architecture, and plant-like movement, Alder’s work appeal to traditionalist and avant-garde collectors alike. His affordable “pot-à-porter” line that is hand-crafted by artisans in Peru is accessible to all who appreciate his work. His “couture” or hand crafted line is made by the artist himself and is available in much smaller quantities at the artist’s boutiques.

Adler’s success has opened new doors for the New Jersey-born artist and led to some exciting collaborations. He has worked with fashion designer Jon Bartlett on print designs, created exclusive pieces for Todd Oldgam’s New York store, and executed his own collection for Pottery Barn. His star-studded clientele list runs the gamut from Catherine Deneuve to Sean Puffy Combs, among others who seek out his design at such exclusive stores as Neiman Marcus, Barney’s Harrods and the Collette boutique in Paris.

While Adler’s works have become the “must-haves” of the style conscious, this cerebral art history and semiotics major from Brown University claims to have utilitarian uses for his works. Adler’s textiles lack the formality of pillows and rugs that are, “meant to be looked at,” and not used. He has created lines for sets, and decanters, perfume bottles, a bathroom accessory collection, and an exquisite line of lamps. His vases, now well known in the world of home design, have a decorative function in addition to their obvious utilitarian role according to Adler. “They’re great for filling a space up space or completing a look,” he says.

For the holidays, Adler is adding new pots, pillows and color to all of his lines, but he hasn’t created an exclusive line for pets just yet. He does make dog bowls and bird cages (in ceramic, of course) that he refers to as “playful and abstract” and, he says, the birds in the country love them.

Adler’s plans for the future include a full line of furniture to create an overall living concept for his designs. He isn’t too worried about how his work will be received, however. “I do not design for other people, but actually for myself,” he says. “I have been fortunate enough to have found enough to have found other people who enjoy my work as wall.”

As for his future with Liberace, Adler plans to adopt a little pal for the pup. He and Doonan love their terrier, but this time around they are getting a mixed breed – a very fashion forward!