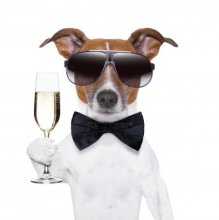 Gift giving goes into full swing when the holiday season approaches, and there are always a few people who leave you stumped when it comes to picking the perfect present. Is that sweater really flattering in green? Would your sister look jaundiced in that yellow jacket? Maybe blue would be better…

Before you make a purchase, may we suggest a warm, spicy red? Maybe a crisp white? Or, perhaps, the universally shade of champagne?

Wine has experienced an upsurge in popularity over the last several years, and it’s a rare gift giver who goes wrong with a smartly picked bottle. According to Bo Thompson, Wine Merchants at wine.com and proud owner of Zach, the company dog, “There’s more great wine available now than ever before, and there is more competition from producers… This means more wines and better values.”

Small vineyard owners seem to agree. Chris Madrigal, Greg Brown and Michael Honig, all of Napa Valley, California, are proprietors of family-run vineyards that are thriving in today’s wine-friendly market.

Chris Madrigal is the co-owner and manager of Madrigal Vineyards, whose vineyard mascot is Buck, a seven-year-old chocolate Labrador. Madrigal’s winemaking skills were inherited from his grandfather, who began working in northern California’s vineyards in 1938. Madrigal and his father jointly own the family business and are, as Madrigal says, “a family who really enjoys red wine.”

Buck was originally purchased to replace their previous chocolate Lab who was a vineyard-loving, working dog. Madrigal and his wife embarked on a state-wide search and as Madrigal says, “we must have seen over 100 puppies when we finally picked Buck… He has been the best dog for kids that we could have ever imagined. The kids lie on him, play with him, and we’ve learned that he’s so much more valuable as a kid dog.”

Though Madrigal’s favorite dinner accompaniment is a glass of Madrigal Vineyard Petite Syrah, he recognizes the virtues of a good glass of white wine as well. “Sauvignon blanc is probably the most underrated wine in northern California. It’s a fruit-driven wine, which makes it a wonderful gift for most people. It’s really enjoyable and interesting with food.”

Greg Brown is the “one-man operator” of T-Vine Cellars. “I make, sell, and deliver all of our wine,” he says. “About 4,000 cases per year.” T-Vine – the T stands for the trinity of body, mind and spirit – is as much a philosophy as a source of income, and Brown’s dogs are an indispensable part of his lifestyle. Ani and Cletus, both mixed breeds, are regular visitors to the T-Vine grounds. “Being a winemaker is an agricultural job – it’s integral to own a dog who is… not admonished for jumping up and down and getting you muddy. It lends itself to a very happy creature,” says Brown.

Like Madrigal, Brown favors Syrah and Grenache two rich, fruity varietals that incorporate earthy, spicy notes. “I fell in love with southern French wines – what I would call peasant wines, bistro wines, that you don’t analyze, but just enjoys,” he says. “You don’t see too many bottles of Grenache, so it’s like tasting outside of the boundaries. If these wines were music, they’d be your eclectic public radio station.”

Honig Cellars has been a family operation since the 1960’s, and Michael Honig is currently at the helm. In contrast to Madrigal and Brown, Honig prefers his meals paired with a chilled glass of white wine. “We drink a lot of our Honig Napa Valley Sauvignon Blanc, and I think the Patz and Hall Chardonnay is a great wine.”

Henri and Balou, Honig’s two dogs, often join him at the table. Henri is a purebred, dreadlocked Puli, and Balou is, “like a giant Schnauzer. He was a pound dog, and my wife fell in love with him because he didn’t jump around his cage. She said he was a real gentleman, “Honig says.

Five cats also prowl the estate, though only one lives at the winery. Honig welcomes his pets at work and praises the homey feel they bring to his business. “Honig Cellars is a working winery, and I’ve found that the animals relax people. It melts the pretense that’s sometimes found in the wine business.”

Honig suggests champagne, long known for its celebratory feel, as a good holiday gort. “S. Anderson Champagne, from Napa, is a great bottle of champagne. They’ve been making it for a long time and it’s a great representation of California sparkling wine.” When it comes to reds, Honig loves his Honig Cellars Cabernet Sauvignon, touting is as an all-purpose holiday present.

As a wine merchant, Bo Thompson tastes some of the most interesting and innovative blends in the wine world, and considers wine to be, “the perfect gift to any Thanksgiving or Christmas dinner,” Thompson’s picks for the holidays cover all prices and varietals. He recommends the 1998 Mak Cabernet Sauvignon-Shiraz as a winning red, and the 1999 Seresin Estate Sauvignon Blanc is noted as a choice white.

In an interesting twist, Thompson also proposes Riesling, long known as a sweet, syrupy dessert wine. He prefers Domaine Allimant-Laugner Riesling Praelatenberg Grand Cru, which hails from Alsace, France. “Sounds fancy and intimidating,” he admits, ‘but get some of that wine juice on your tongue and you’ll never be the same.”

Like the pets owned by Madrigal, Brown and Honig, Thompson’s yellow Lab is an everpresent member of the family, appearing at all holiday celebrations. “At Christmas Zach seems to know that it’s a time for close friends and family to enjoys big feasts and drinks lots of good wine,” Thompson says. “He occasionally sneaks a slurp from some unsuspecting reveler. Though I think he prefers his water to wine, he someone knowd that this sweet liquid is enjoyed by the funny humans.”