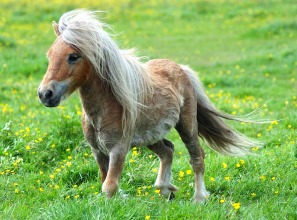 The revelation came to her in 1959, in homage to a brother who succumbed to epilepsy as a child before getting the pony he had always yearned for. In 1993, the dream became a reality when one woman’s petition to make a difference in the lives of disabled children around the United States resulted in the creation of Personal Ponies, Ltd.

Marianne Alexander, Founder and Executive Director of the Personal Ponies Foundation, dedicated forty years of her life to breeding horses before making the decision to shift her efforts away from the breeding aspects of her equine vocation and focus on her talents as a horse breeder in a slightly different direction. She modified her life’s work to target a charitable cause that would benefit not only the horse but the human being as well.

Personal Ponies is a not-for-profit organization that provides disabled children across the United States with their very own Miniature Shetland Ponies to nurture and adore. Testament to the benefits of Animal Assisted Therapy, Personal Ponies grants wishes to hundreds of handicapped children on a daily basis. “There is nothing more rewarding than witnessing the sparkle and magic these ponies bring to a child’s spirit,” says Alexander. “The outside of a horse is good for the inside of a man,” she says, borrowing a quote from Winston Churchill. For Alexander, the logic extends to her audience as well. “The outside of a small pony,” she says, “would you do wonders for the inside of a small child in a wheelchair.”

The only program of its kind, Personal Ponies is proud to announce that it is approaching its 1000 pony mark. To date, nearly 1000 ponies have been registered with the foundation and have been placed either with children with disabilities, on volunteer Breeding Farms, or in the Promotions Program.

The mission at Personal Ponies is to continue to gain support and volunteers for the program in an effort to help make a difference in a disabled child’s life. Their “wish list” is long but realistic. Whether you would like to sponsor a pony for a child, become involved in the breeding program, or start a chapter of Personal Ponies in your area, the Personal Ponies family welcomes you with open arms.

Open arms greeted Michael, 7 year old autistic boy who had never spoken, when he arrived at the Personal Ponies with his mother. S solitary meeting at this magical farm forever altered the lives of young Michael and his family. Within moments of making the pony’s acquaintance, the child stunned everyone present when he embraced the twenty-three inch mare, crying his first word, “Oh, pony!” and burying his face into her mane.