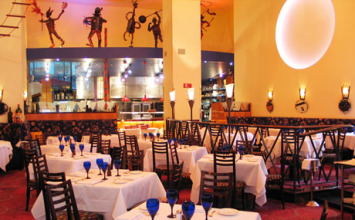 At 33, Marco Maccioni is both the ring master and owner of New York City’s Osteria Del Circo. Son of acclaimed restaurateur Circo Maccioni of Le Cirque, Marco has developed a passion for the restaurant business that has been an important part of his life since childhood. Over the last five years, Marco and his brothers have achieved great success, as Circo is highly acclaimed as one of Manhattan’s top spots for dining.

The eclectic setting at Osteria Del Circo is a circus for the imagination. Inside the restaurant, trapeze sails fly high above a wooden bar and the dining room is a bright blue circus ring surrounded by animated monkeys that perform tricks from above. Draped in elegant fabrics, each banquette is designed to give a warm yet seductive feeling without taking away from the circus-like atmosphere. In the center ring is the main attraction, an exquisite open mosaic kitchen where the famous Tuscan recipes of Marco’s mother, Egidiana Maccioni, are recrated. Among the favorites are her Zuppa Alla Frantoiana (30 vegetable soup), her Ravioli Di Mamma Egi (ravioli filled with spinach and ricotta cheese in a fresh tomato sauce), Tuscan fries with Garlic and Sage and everyone’s favorite dessert Bomboloncini (Vanilla, chocolate and raspberry filled Italian doughnuts).

Marco’s busy day consists of mornings and afternoons at Circo, evenings at Le Cirque, and an occasional bike tide through Central Park. In addition to his hectic schedule, Marco also knew that is was time for him to take on another great challenge – one that required complete devotion, patience, hard work and unconditional love. It was his childhood dream to have a dog.

As Marco began his search, he knew that the Bullmastiff was the bread he wanted. Mimi Einstein, a premier breeder of Bullmastiffs in the northeast, is a dear friend and a regular diner at Circo who helped Marco find his new best friend. At Bully Boy Breeder of New Jersey, a litter of 11 was born. In one corner, isolated from the others, Marco noticed a puppy with an innocent look on his face. “He picked me! All I did was sit in the field and peed and pooped on me,” says Maccioni. Slightly fragile with a rash from his diet and one light-colored ear, the puppy crawled into Marco’s lap, and thus began a new and special relationship.

Maccioni chose his pet’s name from an Italian movie, Il Mostro (The Monster), by producer Roberto Benigni. Il Mostro tells the tale of a tiny warmhearted man who becomes the primary suspect for a series of crimes. Feared by all, the suspect is unaware that he is accused. As Maccioni explains it, “The Bullmastiff has this very terrifying reputation, as the man did in the movie. But in reality, they are the sweetest, sweetest, sweetest, dogs in the world.”

At 16 months and 135 pounds, Mostro has created a bond with Marco that truly changed the latter’s life. Having never had a pet as a child, Marco developed a father and son-like relationship with his new pup and as a father does, Marco always takes the best care of Mostro. Driven by food, Marco watched his pet’s diet from the start. He feeds him Eukanuba Premium Performance Dog Food, an occasional giant boiled veal bone at Circo, and fresh fruits and vegetables as snacks.

With such a busy schedule, Marco always finds time to spend with his new companion. They love long car rides together and traveled through Tuscany this past summer. While Marco works the dining room of Circo, Mostro relaxes in the back room of the restaurant. Loved by all the regular customers and staff, Mostro has become a new addition to the Maccioni family.

With his restaurant, Marco Maccioni has found true success. With his dog, he has found the true meaning of man’s best friend.