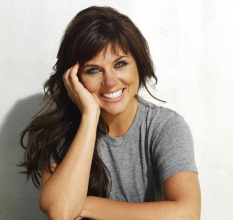 Tiffani took to the Black Leopard in no time and believes in helping our animal friends. “One of the greatest privileges we have is to experience love and compassion for animals,” she says. Her two cats, Sadie and Savannah, and her golden retriever, Clyde, are the daily recipients of Tiffani’s animal affection, and three sources of inspiration behind her decision to support the project.

Stars in the Wild is a new environmental awareness product development company that supports the preservation of the animal population and the environment. Each animal represented in the Premiere Collection was adopted by celebrity and a percentage of the proceeds from the sale of each toy will be donated to animal and environmental charities.

Other celebrities joining Tiffani in the project:

Look for Tiffani this October on the big screen in Paramount Pictures’ new release, “Ladies’ Man”.