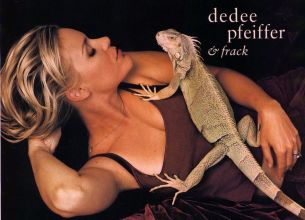 Actress, Dedee Pfeiffer, has never seemed to be able to pass by an animal in need without lending a helping hand. “I came home one day with a duck I bought from a garage sale”, Pfeiffer remembers. “My mother let me keep him,” she says, “so I built a pond in the backyard and named him ‘Pepper’.”

Pfeiffer was just a girl at the time, but little has changed for the animal advocate. Her home is filled with pets she has rescued including two geriatric dogs, a 15 year-old cat, six doves, an iguana and 20 codfish. How serious is she about caring for her animals? Pfeiffer has just hired a full-time assistant to help her pets, especially her geriatric Rottweiler, Boecephus.

Each of Pfeiffer’s pets enjoys his or her own space in the actress’ Los Angeles home. There are birdcages in the kitchen and the living room for her doves, a giant blond oak cage for her iguana, a pond in the backyard for her fish, and an entire house in which her cat and dogs freely roam. Pfeiffer has even purchased a king-sized bed to cozy up in with Boecephus and “Orphan”, her geriatric Boxer.

What does the home of a television and movie actress look like? “I used to have beautiful rugs all over my home,” says Pfeiffer, “but they are no more! I kept bringing them into the rug cleaners and one day the owner gave me a choice – either I keep the rugs or the dogs.” For Pfeiffer, who was slightly offended by the ultimatum, there was no choice to be made. With the tugs long gone, Pfeiffer admits, “It’s a lot easier to clean up now!”

Keeping her décor intact takes a little planning and extra work, but Pfeiffer doesn’t mind. “I put sheets all over my couches that I take off before company arrives,” she says. “I also do a lot of vacuuming.” It’s a small price to pay for the joy of being with her pets, according to Pfeiffer.

Caring for animals in need is not just a home based hobby for Pfeiffer. She recently agreed to help launch Kal Kan’s new campaign called “Homeward Bound” which encourages shelters nationwide, through funding, to place as many animals as possible in homes and to educate the public about being responsible pet owners.

“This is something I just had to do,” says Pfeiffer of her new role. “Responsible pet ownership means spaying or neutering and tagging your pet. And I would encourage people to investigate shelters before looking for pets to take home.” she says.

Speaking from personal experience, Pfeiffer warns people to understand the commitment that comes with adopting an animal. “When you make the choice to have an animal, more often  than not it is a long-term commitment,” she says “and you have ti be prepared for that. When I got him, Boecephus took care of me, and now it’s time for me to take care of him.”